The Nike Air Jordan 1 Bred is called that because of it’s colorway. The Black and Red version of the iconic first ever Michael Jordan shoe is amongst the most coveted kicks in any sneaker lover’s collection.

First, the sneaker unboxing video, as always, to get things started from my YouTube channel.

Legend has it, that Jordan was fined 5 thousand dollars every time he wore it to a game because it violated uniform regulations. The first game during which this issue popped up was played in the Madison Square Garden on the 18th of October 1984. The colorway was considered rebellious, back in the day because it didn’t match with the players uniform or his team members shoes. To add to that, it is claimed that Nike paid the fine (rather gladly) on behalf of Jordan every single time which gave it a solid back-story. And a lot of people debate the validity of this story. For instance, while there is evidence that the NBA had a problem with the shoes Jordan wore to the court, it can’t be said without a doubt that it was the Retro 1. In fact, images from those games show Jordan wearing the AirShip shoes. But either ways all of the arguments aside, the brand was created and therefore the infamous “BANNED” label.

2016 has been a monumental year for the sneaker culture all over and even more so in India. The Jordan 1 Banned is amongst the most hyped drops this year. Nike didn’t do raffles and neither is this sneaker a limited release. However, they have been playing it smart by stocking the Banned 1‘s in small batches across various platforms both online and offline. India has seen 4 restocks since September already. This is actually a pretty smart way of retaining hype and killing the reseller market. Although it sort of dilutes bragging rights when you finally manage to cop a pair. 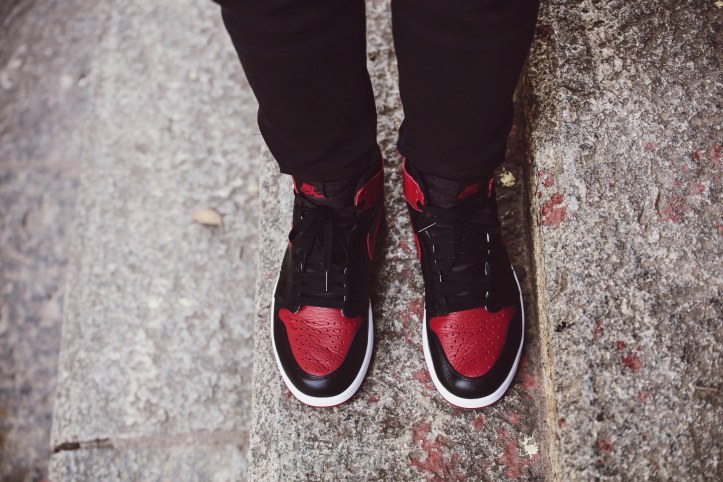 I already own a pair of the limited edition Nike Air Jordan 1 Space Jam sneaker, which I reviewed here. But if you don’t have the Bred’s you got nothing.

The Air Jordan 1 Bred features a tumbled leather finish on the toe box and the branding on the swoosh + side panels. So essentially, all the Varsity Red hits come in tumbled leather. Staying true to the original 1985 sneaker, the insole is now white with the Nike Air branding making a comeback  on the tongue. Also, a very interesting detail, the size is printed on the inner collar which is again a throwback to the original. Now here is a bit of trivia. The serial number is not just that, it is the date when the sneaker was apparently first won in an NBA game. Nice touch!

The sneaker came with three sets of laces – Black, Red and White (much like the colorway of the sneaker) but I think I will stick with black. The iconic “Wings” branding on the heel is stitched in, which is a nod to the 1985 release.

Either ways, at least you won’t have to pay the (alleged) fine of USD 5,000 every time you work these kicks! 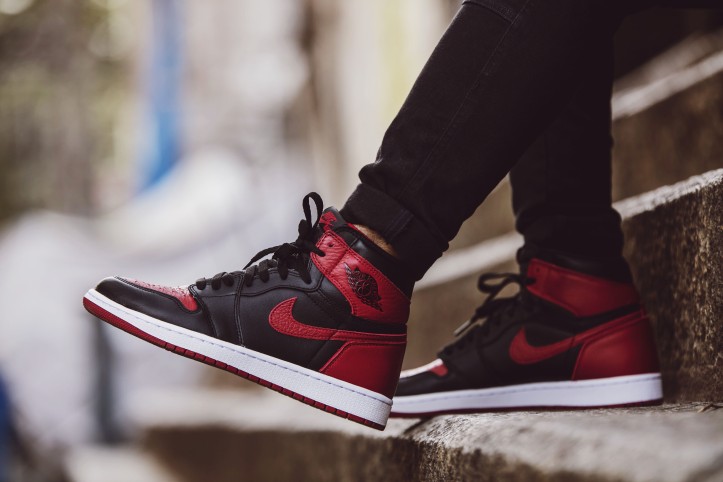 I’m always buzzing, just like neon!
Vaccine Outfit! How many of y’all got your first dose? 👀
Went all the way to IKEA, and all I got was this picture at the Café 🤦🏽‍♂️ #MJMondays
I sometimes order takeaway on my way, to simulate someone waiting at home for me with a snack 🥲
Bombay weather acting up, like a Cancerian!
Pairs from plugs, in 2021 so far!
Almost blended in there, just like my iced coffee 😏
Some of y’all act like 1s are the only good Jordan silhouette 🙄 #MJMondays
Foamrunners in the rain. Yay or Nay?
Follow bowties and bones on WordPress.com