Thanks to the kind folks at adidas Originals India, I managed to get my hands on a pair of the adidas Originals Yeezy Boost 350 V2 in the Black/Red colorway. Also called the BREDs, I did not think I would get lucky with these kicks considering all the hype and rush at the stores. Most pairs were pre-booked, to make the probability lower.

I have had a good run in 2016 when it comes to sneakers. I took a whole lot of W’s, except when it came to the BAPE NMD by adidas Originals. I softened the blow with a pair of XR1 Duck Camo NMDs though.

On-feet, details and comparison with the Beluga Yeezy Boost 350 V2:

When this pair dropped on the 23rd of November, it came with 2 other color options – Black/Copper and Black/Green. However, the Black/Red was arguably the most sought after colorway. As in the case of the first 350 V2 (Beluga), this sneaker’s upper features the dual tone prime knit. The knit is comprised of black and red colors. The red hits pop out through the upper which is something that lends this pair character. And then there is my favourite part, the striking red stripe across the lateral side of the sneaker.

Like on the Beluga, the outsole is translucent albeit done in black. It runs the boost sole throughout. I haven’t worn my Beluga boosts except to get a few images but the BREDs have gotten a fair bit of wear time.

Where it differs from the earlier Beluga version, is that the text (SPLY-350) on the right pair is mirrored.

When I recently flew down to the land of Biryani – Hyderabad – for the Jaguar Performance Tour, the Black/Red Boost was on my feet. I wouldn’t wanna  be seen wearing anything less significant when I was at the wheel of those powerful machines!

What boosts (pun intended) the hype on these kicks, is the fact that Kanye West was seen wearing a similar Black/Red Yeezy Boost 350 V2 on several occasions and snapped by the paparazzi. And although this isn’t the same sneaker colorway, the appeal rubbed on.

This post comes hot on the heel of the last drop of Yeezy Boosts in 2016, the Oreo’s. Which was your favourite Yeezy drop of 2016? Let me know by commenting. 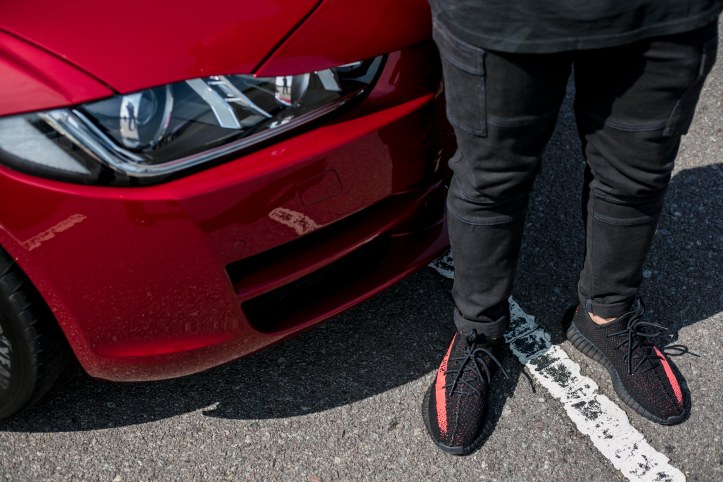