I remember when the much-hyped Yeezy Boost 350 launched, I wasn’t too crazy about it. For me, for lack of a better word, it looked like hobo shoes. That was until I saw the Pirate Black version and I really wanted to get my hands on them. Sadly, as luck and miscommunication would have it, I reached the raffle about 10 minutes late and lost my opportunity. However, I did manage to be amongst the first few Indians to cop the Yeezy Boost 750. You can check them out here. Incidentally, I did a review of the ZX Flux ADV X which I thought was inspired by the Yeezy 350, here.

Coming back to the Yeezy Boost 350 V2, I wasn’t too crazy about them either when I saw images of them splattered all over social media. I thought the “orange” stripe running through was some sort of prototyping bullsh*t. Then there was the speculative name, 550 when Kanye wore them around and teased them to the general public.

Anyway, the launch day was upon us and thanks to my home-boy Gokul M and Jerry Sebastian, I was able to get to the store to do a quick detailed video review of the sneaker. My only intention was to get in, shoot the sneaker, get out. But as I unboxed the kicks and took a closer look at them, I was in love. I dropped in a raffle ticket (mine was the first ticket, serial #001) and surely enough I managed to cop the pair. It did not come easy, considering the rush and the common UK 8 foot size (by Indian standards) that I have. That is the story that lead up to my second pair of Yeezy’s and my first ever 350!

Now there are obvious differences from V1 of the 350 and I will take you guys through the details. The entirely Primeknit upper on the Yeezy 350 V2 comes with 3 distinct colors that run through the entire sneaker. The colors – Beluga, Solar Red and Steel Grey – are woven together. The ribbed midsole is translucent with a padded collar and very obvious heel. The graphic stripe in Solar Red has the “SPLY-350” text running through it. While people said it stood for Supply 350, people in the know claim it stands for Saint Pablo Loves You! The stripe closely resembles the stroke of a paintbrush as it ends up front very close to the centre stitch.

I have not tried on the earlier 350 but I hear the fit has been improved with the inner padding. And I would think rightly so, because the V2 ankle collar visibly has a lot of cushioning now. Speaking of which, the ankle is raised in comparison to the older version which lends it a better silhouette. You also have the 3 stripes that run inside the ankle collar which is the only visible adidas branding on the shoe. 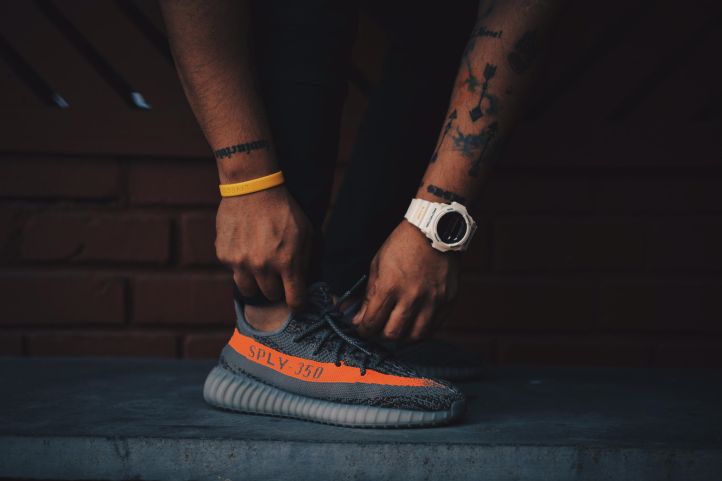 The outsole has your typical Yeezy cut outs to show off the full length boost cushioning. The outsole quality has improved a lot over the earlier versions and you can say that merely with touch and feel. The thickness of the outsole has been evidently increased and the rubber feels a lot more better on the ride.

The insole, like on any Boost endowed sneaker is nice and lush. The cushioning is remarkable and comfort, brilliant. The fit is pretty snug. True To Size, is the way to go with these kicks. I have broad feet and they fit me just fine.

On-feet and in-hand shot by Jobby Jose for Bowties and Bones. Detail shot by yours truly.

I am not gonna let these sneaker cool, they are gonna get a whole lot of wear from me in the coming days. I think it is time I got social and went out of my house. If for no other reason, only to rock these kicks! And I am going to be under a whole lot of pressure to style these sneakers. Better get me some Supreme merchandise. Haha.

Having said that, I look forward to the black colorways because I know for a fact, I am going to want a bunch of them for my arsenal.

Let me know in the comments, what you make of these sneakers. And as always, stay fresh.